There has been three projects that caught my interest on first sight and that I’ve been keeping tabs on the last few years. And since one project was finished and released this year and there was some major developments in the other two, I find this a perfect moment to present a progress report.

In the beginning of December the Spark D-Fuser DVI mixer finally showed up. There’s finally an affordable hardware solution for mixing HD video. I’ve been really keen on this idea ever since I first laid eyes on the project three years ago and it ended up being the most covered hardware project on this blog so far. I communicated so much with Toby Harris, the father of the Spark D-Fuser, that I ended up being a tester of the video processor and mixer software. There were a lot of bumps on the road that caused massive delays so it’s great to finally see this project come full circle. Especially since it’s a project that was born in the VJ community.

A few similar projects has come up this year like the HD Rabbit from Carrot video, a prototype that is based on the same video processor and the various mixers built for the Black Magic ATEM switcher by Kasper Skaarhoj. Even Roland came out with a new HD video mixer but non of these projects are as cheap as the D-Fuser, certainly not the Roland. The whole Spark D-Fuser kit costs £870 which is just slightly more than a trusty old Edirol V-4. If you already own a TV One 1T-C2-750 scaler you can purchase only the mixer unit for £270 but then you’d miss out on the additive mixing mode that you only get if you get the full kit from Sparklive.net.

Toby has just recently released a getting started video that goes through the basics of the final product. Sign up on the Sparklive site to get in on the second production run. 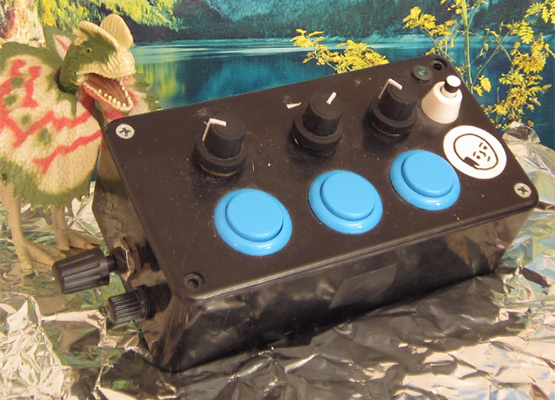 I read about this project for the first time on Create Digital Motion in April of 2011. It was a beautiful little machine called The Glitch Grinder by the Vienna based artist Juergen Koppmann. The machine trashes the video input and spits out the beautiful glitchy result at the other end. I instantly fell in love and got the impression that this was a product that was going to be released soon. I wrote to Juergen and asked and after a few emails I understood that sure, he wanted to turn this into a product but he couldn’t really explain how he had put it together. He told me that it wasn’t that hard but since he hasn’t studied electronics he doesn’t quite know how to explain it.

I signed up for his blog to keep track of the project but was mostly fed with artsy camping pictures and very rarely something about the Glitch Grinder. But just recently we got in touch again because Juergen finally found someone who could help him write down the schematics and make a better prototype. His new partner, only mentioned as Moosehead, has made something that works but the result does not yet look the same as the output of Juergen’s original prototype. They are still working on the new prototype on a bread board level and doing more tests the following weeks. It’s hard to tell when the Glitch Grinder is going to be finished but the plan is to have kits and maybe have some assembled units for sale “soon”.

This French controller sounded promising when Andreas Apelqvist reported on it over two years ago. The “beer proof” controller was showcased at the Mapping Festival in the spring of 2010 and promised to be released in September that year. The controller was made especially for Garagecube’s Modul8 VJ software and the buttons and sliders of the Activ8 reflects Modul8’s user interface. But surely it would be possible to use the controller with any other MIDI compatible software.

September passed and no release. Another promise was made the following year. I got in touch with Codanova to check on the progress and received a reply that oozed of Google translation and the email conversation got a bit weird. What I could harvest from the correspondence was that the main developer of the Activ8 controller had quit and they had to start over almost from scratch causing more delays. In may 2012 Garagecube reported that the controller was showcased once again at the Mapping Festival and “performed flawlessly”. In November Le Collagiste announced that the legendary French Midi control maker Codanova would be closing down. However, the same post mentioned that the Activ8 prototype was fully functional and that the project had been handed over to Garagecube and was ready to go into production if Garagecube choose to follow the schedule.

So will Garagecube release the Activ8 or not? I contacted my friend Ilan Katin at Garagecube to get a comment butI got stonewalled. This is a normal tactic of Garagecube, they almost never promise or hint anything about up coming functions or release dates, so nothing to get worried about there.

Now I’m moving into speculations: I’m not that sure Garagecube will waste any time or money on this VMX Activ8 controller that is so tightly bound to the Modul8 user interface. The Modul8 software has been given very little love by Garagecube lately and a job post from May this year suggests that GarageCube and 1024 Architecture has a new multi platform engine for realtime multimedia applications in the making. Also keeping in mind that Garagecube seems to have painted themselves into a corner with Modul8 when it comes to The QuickTime API, Quartz Composer, Syphon input and locking functions in the interface. It’s a fair assumption that they are spending most of their time on that new project rather than reengineering Modul8. Thinking of how well MadMapper (GC’s first joint venture with 1024 Architecture) turned out, I’d be very interested to see what will become of this new project… whatever it is.