May 18, 2013 | Posted by The MIDI Thief | Comments Off on The Mixxeo HDMI/DVI mixer project
Posted in hardware TAGS: dvi-mixer

I’ve heard rumors about yet another HDMI/DVI mixer in the making. This one is called “Mixxeo” and is coming from the Milkymist community. If you’re not familiar with the Milkymist, read this and watch this presentation. I tracked down Sébastien Bourdeauducq, the founder of the Mixxeo project, and asked him a few questions.

My initial belief was that this was just a mixer add-on for the Milkymist One. This is just somewhat true. During initial development the mixer has been an add-on but the final product, the Mixeo, will be it’s own device based on the Milkymist hardware. 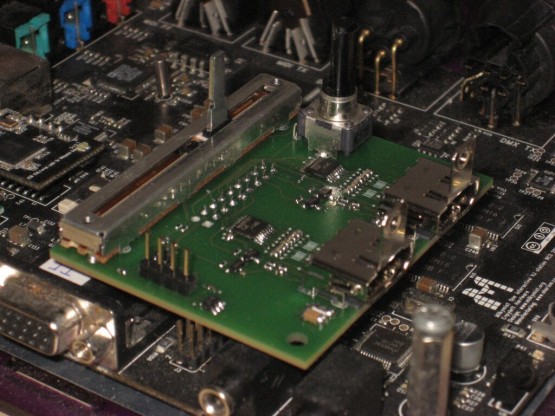 An early mixer add-on to the Milkymist One.

Compared to other projects from the VJ community, this is a complete video mixer while the others are mere controllers for other scaler/switcher products. This makes it possible to code blend modes, visual effects and support for other devices which makes it really powerful. It also has an I/O port that makes it possible to add peripherals, either officially supported or third party “hacks”. An example of a supported peripheral connected to the I/O port  would be a monitor. Unsupported “hacks” could be reintroducing USB, MIDI and DMX for example. Look at the Papilio FPGA development kit to get an idea of things that could be added. Did I mention that both the hardware and software of the Mixxeo is open source?

The initial version will have 720p resolution at 60 frames per second. On the prototype you will have to hook up a crossfader and a fade to black knob to the I/O port by yourself but the final product will have these built in.

Here’s the official feature list of the prototype with some comments of mine:

My final question to Sébastien was if the mixer has enough bandwidth to mix sound as well. He replied:

“Sound is very low bandwidth compared to video and definitely feasible technically, but someone has to put in the gateware/software development effort which is non-trivial. You also have to consider the technical support, user interface design and potential compatibility issues. My approach is to focus on a straightforward device that does one thing, but does it perfectly. ”

The Mixxeo is currently at a stage where Sébastien will order a small batch of prototype mixers. It’s pretty much just a board with some components. People are free to get in on the first batch for €700 (incl VAT). The initial version can contain a few errors so you should not be afraid of board reworking, soldering, programming and getting your hands dirty. This is a way to help Sébastien in the development and share costs/risk. While the the prototype is ready to be produced in a small series now, it’s too early to tell when the finished product will hit the market. And the same goes for the cost. A few things needs to be added, like an LCD display and a user interface but the product will be cheaper if it’s produced in larger quantity.